2. Sift flour, baking powder and salt into a large bowl, whisk well to combine. Add raisins and whisk again. Make a well in the center (a hole with the back of a spoon).

3. Add cream and lemonade to flour. Using a large metal spoon, mix the ingredients gently – be careful not to over-work the dough (over-working the dough will make your scones chewy and flat).

4. Sprinkle some flour on a clean work surface and turn dough, bringing it together with your hands. The dough should be slightly wet but not sticky (add more flour if needed).

5. Using a rolling pin, roll the dough into a 3cm-thick round. Dip a
5.5cm round cookie cutter in flour and cut dough into rounds, making sure to re-coat the cutter with flour each time (re-roll off-cuts if necessary)**.

6. Remove the tin from the oven and generously flour the tin, shaking off excess. Place the rounds on the tin, side by side to encourage even rising.

7. Using a pastry brush, lightly brush the mixed egg yolk and milk over the top of the scones.***

8. Bake for 15 – 20 minutes or until scones are golden and sound hollow when tapped. Transfer to a wire rack.

9. Using an electric mixer, beat cream and icing sugar until soft peaks form. Serve scones with cream and jam – Devonshire or Cornish style (however you prefer).

Scones are best eaten on the day they are made but are also good re-heated on day 2 or 3.

Scones freeze well in an airtight container or freezer bag.

* If you don’t have a tray with sides (at least 3 inches high), you can use an ordinary tray – a deep tray encourages rising, producing a taller and fluffier scone.

** when cutting dough into rounds, press the cutter down and back up again – do not twist the cutter as this inhibits rising.

*** If you don’t want your scones to be too brown once baked, omit the egg yolk and just use milk.

Adapted from Food To Love 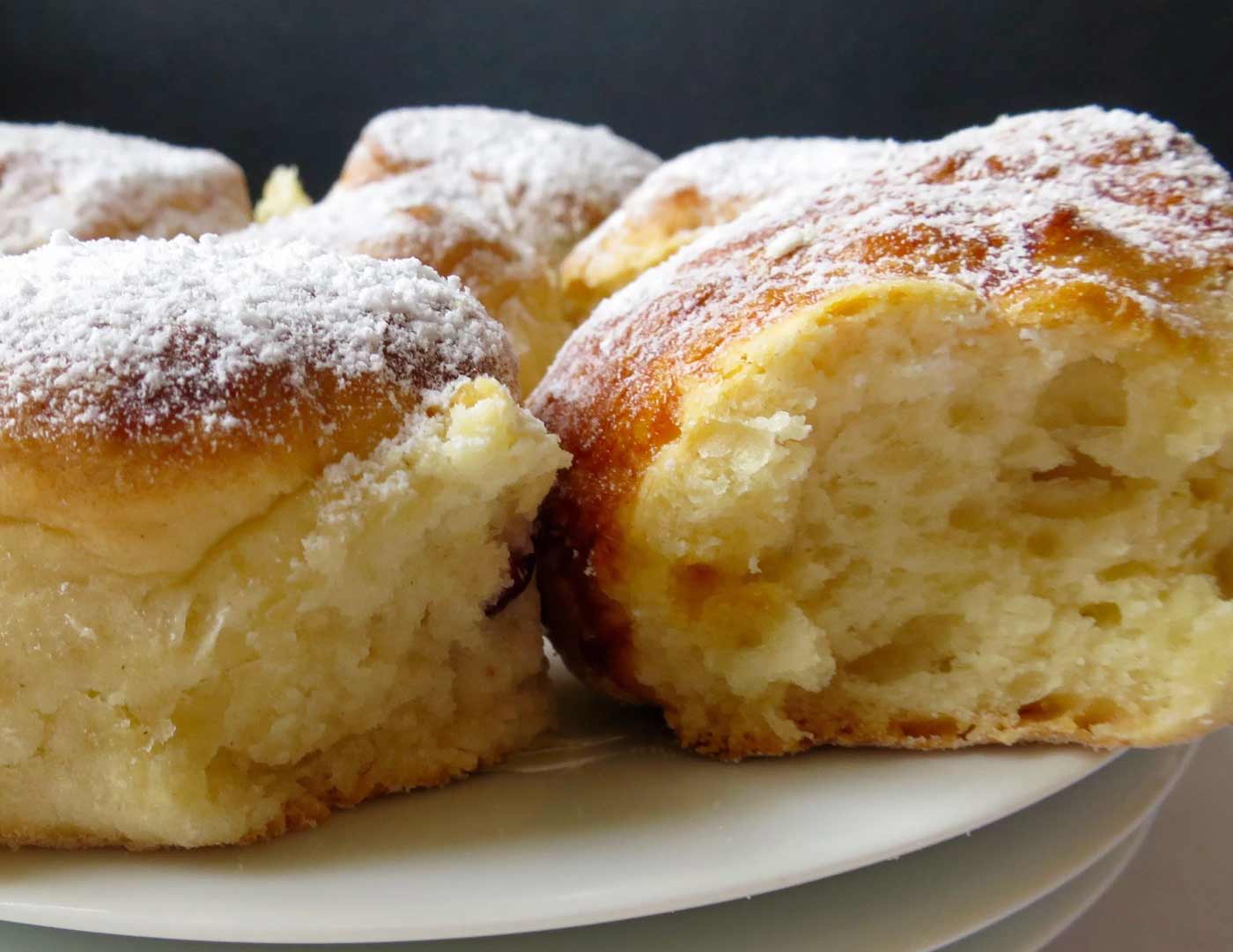 Cream tea anyone? Learn how to make the lightest, tastiest and tallest scones with this easy recipe! Best served with a generous dollop of cream and jam!

…or are they biscuits?

In England, they are nearly always scones. To them (and to me too) a biscuit is a ‘cookie’, but Americans use the term ‘biscuit‘ for scone-like doughs (they are nearly identical to scones however tend to be a bit flakier in texture).

We’re talking about cream tea today and cream tea in England is always served with scones, not biscuits.

Scones are a beloved favourite among many nations (namely England), and they have received a lot of undivided attention over the years.

After all there is a lot to consider like:

Should the scone be made with cream or without?

Raisins or no raisins?

What about baking powder?

…and when it comes to eating them:

Eaten with hands or with cutlery?

During our road trip around the UK over the Christmas holidays, Kevin and I ate our fair share of cream teas, and they were all delicious. We learned a thing or two about scone eating etiquette and it certainly gave me a new appreciation for scones (never again will I think a scone is just a scone).

In case you’re like me and don’t know a whole lot about the ‘do’s and don’ts’ of a cream tea, here’s a few things you might like to know:

When it comes to a cream tea, the scone is the main event and it is certainly never boring in the eyes of a cream tea lover. A lot of thought has gone into the texture, shape, flavour and recipe of the scone and it is usually served with pride.

There are several ways to make scones and depending on who you talk to, there are varying different recipes and opinions about what the ‘best’ really is.

Recipes vary from using only butter or a combination of butter and cream (debatably the most traditional), to buttermilk, baking powder or cream of tartar, or lemonade (see below for recipe).

Rule #2: Know the difference between a Devonshire Cream Tea and a Cornish-style Cream Tea

People feel very strongly about the way their cream and jam should be served with their scone and thus, there is a constant ‘battle’ going on between Devonshire and Cornwall about which way is best.

Although I think the Cornish looks prettier, I personally prefer the Devonshire way for a better and more even distribution of jam and cream. However you like it, make sure you know who’s side your own and perhaps don’t share a cream tea with ‘the other side’ to avoid arguing. 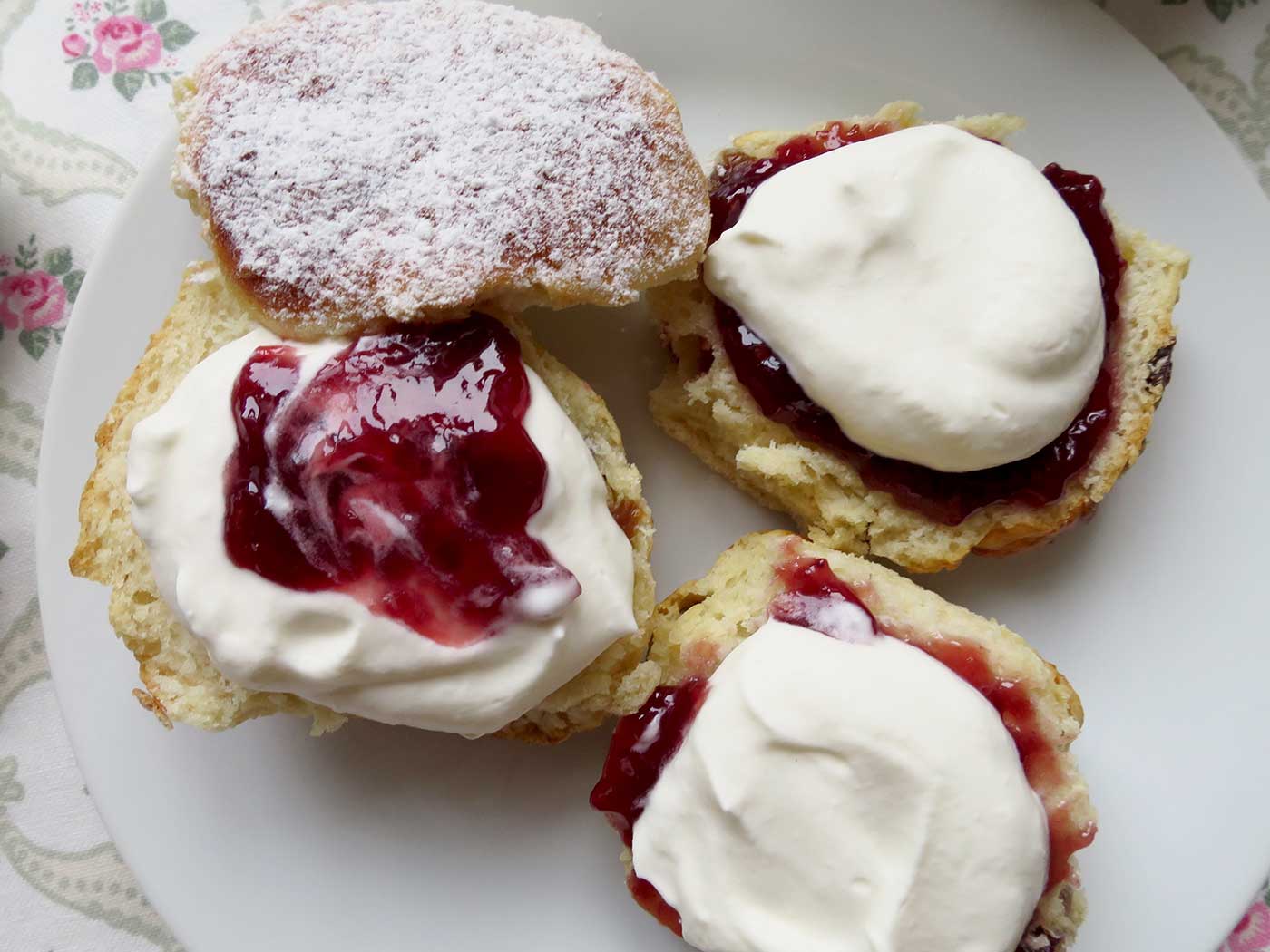 It certainly is a serious business. Check out what these food scientists did to create the perfect cream tea. Oh my.

Rule #3: Scones should always be served with clotted cream

…and to think I didn’t even know what this was before visiting England. It turns out my whole life I had been eating my scones the ‘wrong way’. Clotted cream doesn’t exist in New Zealand, which is surprising to me seeing as we once came from England. Nevertheless, it is very frowned upon to serve a cream tea without clotted cream (opps). 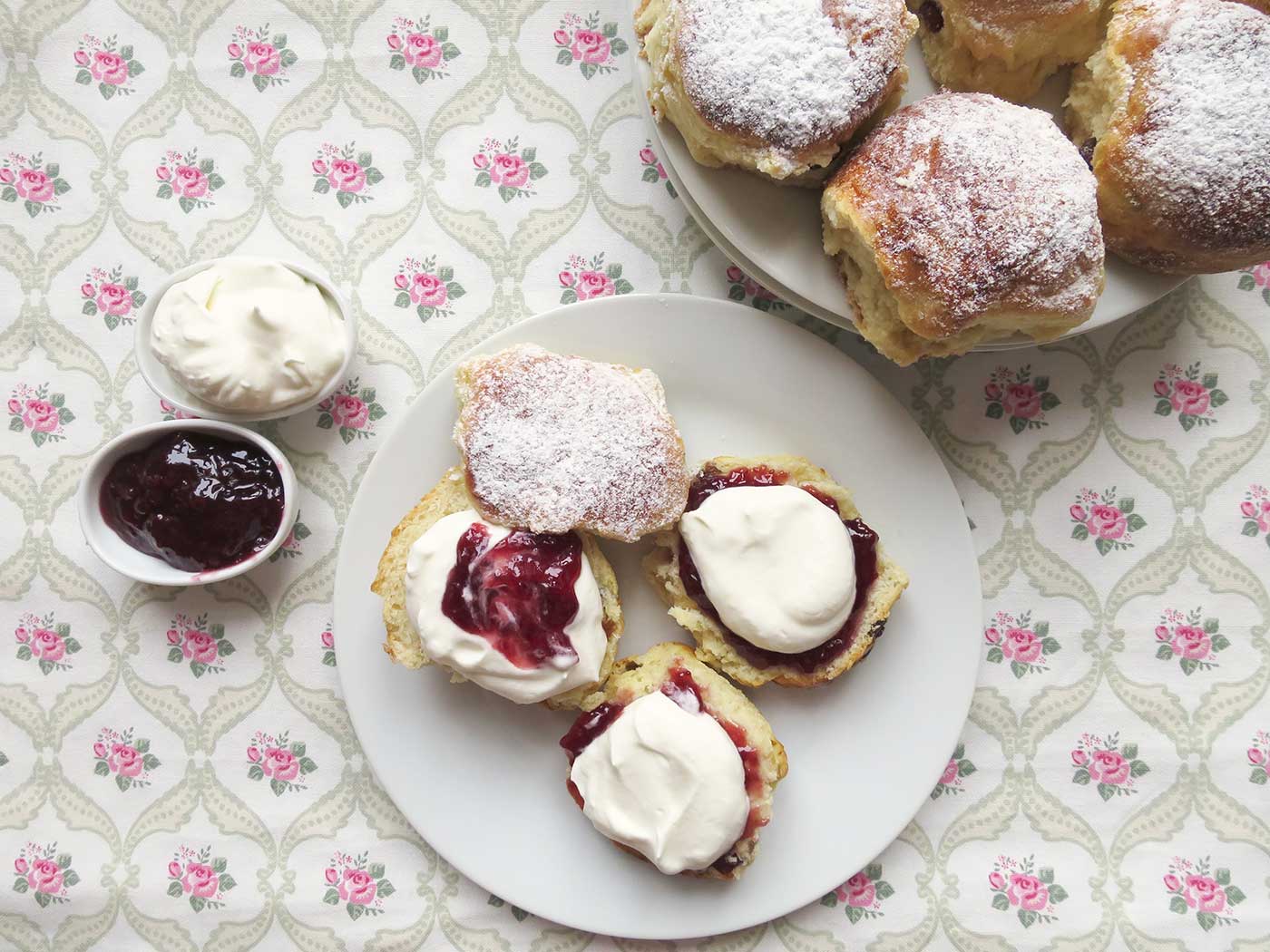 Now that I have the etiquette sorted, I thought it was only fitting that I should try my hand at making scones myself – it’s been a while.

Classic scones like the ones I tried in England were a little dry for my liking. I wanted a scone that was fresh tasting, slightly crumbly, fluffy and no fuss to make – and then I remembered my Mum’s good ‘ol recipe – probably the most nontraditional of the lot, but a winner all the same, it’s the Lemonade Scone.

It only has 3 basic ingredients (great, right?) and they are ridiculously light, fluffy and the perfect partner in crime when teamed with a generous helping of cream and jam (Devonshire style, please).

Have I got you wondering what those 3 magic ingredients are? I hope so – they’re cream, lemonade, and flour. For additional flavour you can add, a pinch of salt, dried fruit, zest of a lemon, spices or anything else that you feel like. 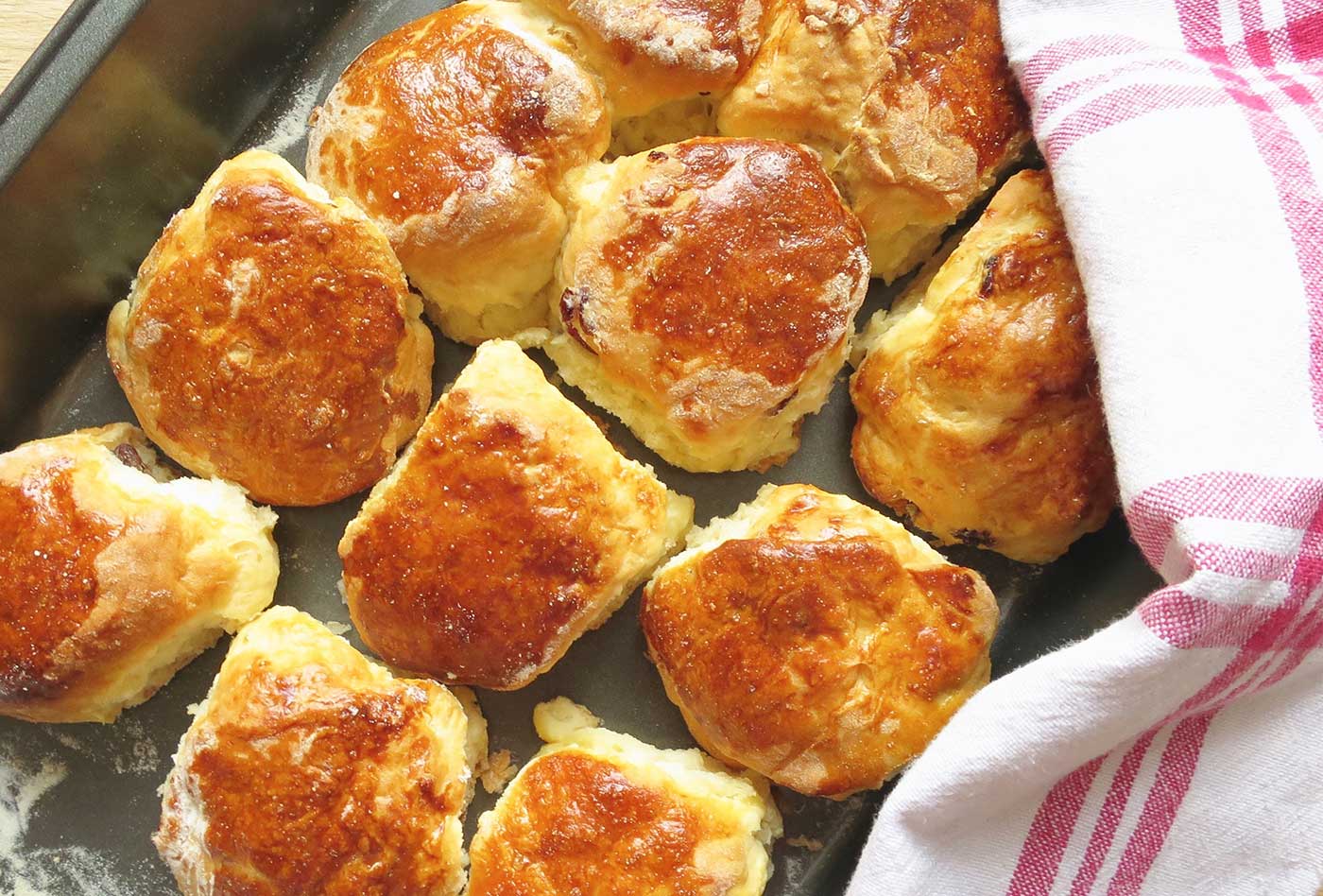 How do those ingredients work?

I’m glad you asked. The liquid in the cream and lemonade evaporate, expanding the bubbles in the lemonade (alongside the baking powder), which make the scones rise and give them that extra light and fluffy texture that we love. When you work the dough (just slightly) before baking you are developing the gluten strands which form the structure of the scone. Cool huh?

In addition to learning about scone eating etiquette, I also learned a few baking secrets when it comes to making scones. These are included in the recipe so that you can serve your scones proudly too. 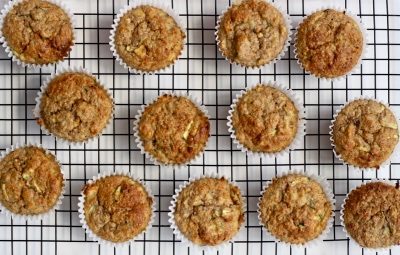 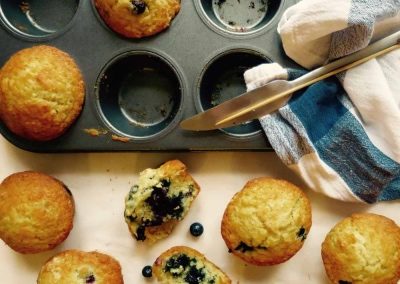 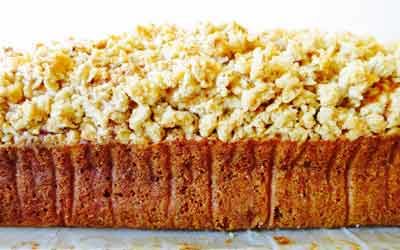 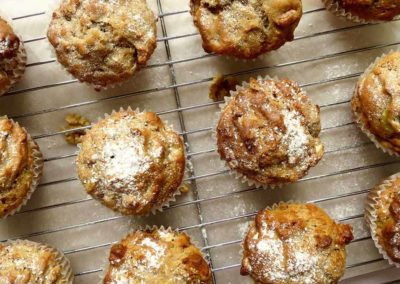 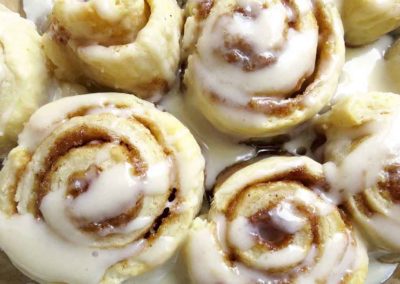 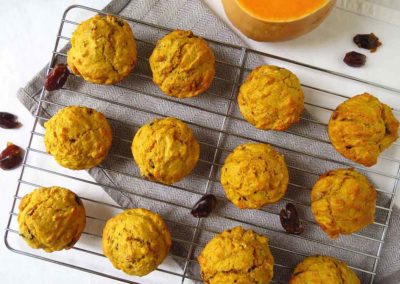